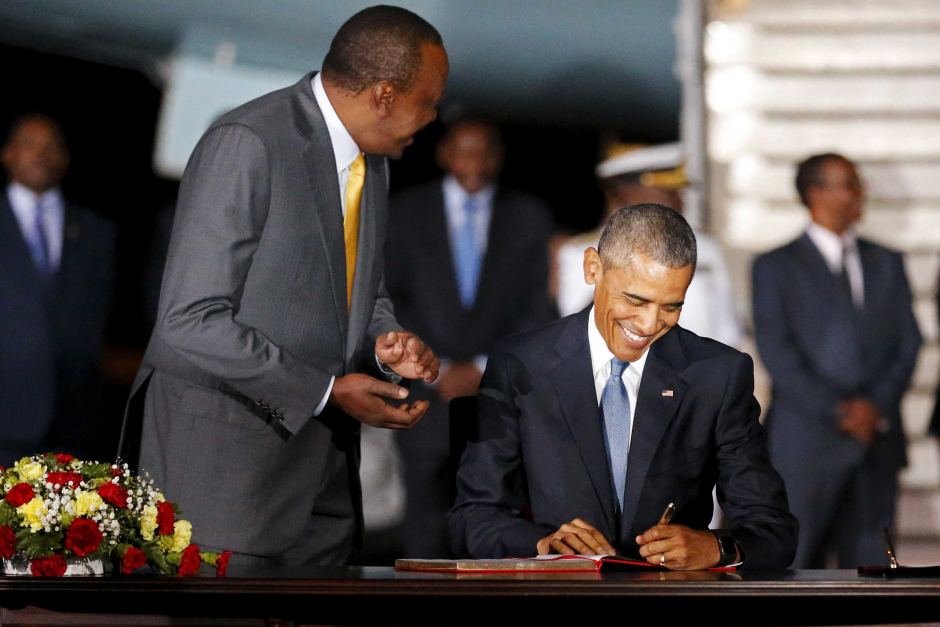 The United State’s president, Barak Obama, and his loving wife Michel Obama, are now visiting to Kenya, which is familiar as his father’s land. This visit was supposed to occur in March of this year, but having some unavoidable reason, the president had to postpone his tour and assured to go to Kenya in this current week, and finally, he could keep his promises. It is his fourth times tour of his father’s land. The Kenyan people were eagerly waiting for this visit, and their dream came in reality at last.

Barak Obama visited the Kenya in 1987 for the 1st time. He was very young then. He also visited with his fiancée Michel Obama in 1992. And later, he also visited there as a US senator. But he never made a tour in Kenya after becoming US president. SO, this tour would be certainly quite different from all the previous tours too. Not only the Kenyans, but also, Barak Obama and his whole family are very excited for this tour. Barak Obama also made a list of his relatives, whom he wants to meet in Kenya.

Obama declared that, he will go to visit that lace, where his dad born. And he also decided to meet one of his grandmothers, who are still alive. Though this tour has been organized in order to make strong the security and economical condition of the both countries, but it can also effect on the Obama’s family backgrounds too. Moreover, the Kenyan public also waiting for the precious footsteps of the most powerful American President, who is commonly considered as their home child and very close to the bottom of their heart. They feel the same feelings as Barak Obama feels for them also.

However, the Kenya is getting renovated with a very festive look at the reason of visiting Obama. The mugs, T-shirts, bands included by the Barrak Obama’s photos, are available in the gift shops. The government of Kenya also said that, they are very happy by the arrival of the current American president, especially whenever he was from their own country. This is also a pride to them indeed. They also arranged some traditional souvenir and gift for Barak Obama and for his other family members also. The Kenyan government also hoped that, this tour will also help to develop the relation in various sectors between these two nations. All this event was covered by today top media grouops.

Barak Obama is one of the most powerful presidents of America. He is only one president of America, who is black in skin tone. But his activity and glory, just made him unique among the all. He joined the politics from a very young age, when he was just a student. After that, he married his ex-classmate Michel and then become a proud father of two beautiful daughters, called Shasha & Malia. Barak Obama elected continuously twice in the presidential election of America and still now proudly ruling over the America, which is one of the strongest parts of the world.

Fitness Trainers Are More In Demand

Modernization has made huge impact on our lifestyle as we are willing to spend huge amount of money in order to make our house perfect from each angle. Instead of purchasing new products, hiring end […]

Whom do you call a team? A group when working together helps each other becomes a strength for each other, shares with each other is called a team. Related posts: What Are The Benefits Of […]

Electrobraze is a company known as specialists in pin brazing, manufacturing pin brazing consumables and accessories that are completely free from Cadmium. This has helped them to produce safer and more versatile pin brazing to […]