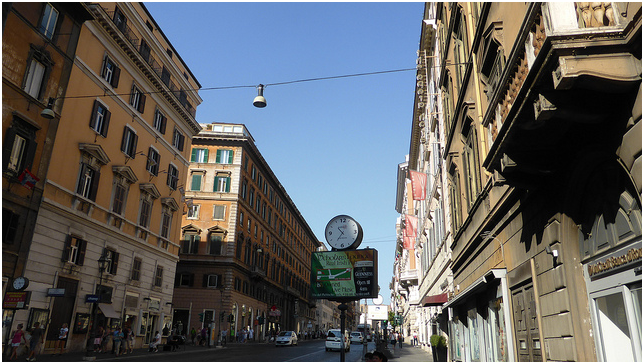 The map of metro is rather simple, looking like the letter Х. It consists of two crossing lines А and В. The red line A comes from the South East to the North West, just to the Vatican. The blue line B comes from the South to the North West. As you can see, the underground transport is not well-developed in Rome. There is a wise explanation of this fact: Roman workers always pitch upon the archeological artifacts.

There is a big plan to complete C project this year. This is a great project to combine the useful with the pleasant: the metro map with the interesting museum instructions. Todays metro works from 5:30 a.m. till 11.30 p.m. It is worth saying that a modern subway in Rome is not the most comfortable way of travelling. It is better to use just to get to the Central Station, or the center of the city – a special exhibition zone.

Roman trams operate from 5:30 a.m. till the midnight. They are usually two kinds: old and new. The old trams are red, like from Fellini’s films. You can see them in the territory of the Central Railway Station. The new green trams go between Torre Argentina and Trastevere. Unlike the Roman buses, city trams can stop at-halt, according to the timetable. If you want to go out of the tram, you need to push the button inside.Bus is the most comfortable way of travelling in Rome, as it has the wide route network with the interval of 10 minutes. The buses are divided into usual transport, expresses and night buses. As usual, buses are yellow and red, the route numbers at the bus stop are assigned with red, blue or black color.

The expresses are green and they do not stop very often. For example, the most useful for all tourists is the route № 40, going straight from the railway station forecourt, making stop just at the important places. These touristic routes are assigned with green.

All the mentioned before bus routes start working from 5.30 a.m. till the midnight. Then, it is the time of the night routes, which are colored dark-blue with a yellow owl. The night routes network is not wide. Nevertheless, they are comfortably divided into 20 bus lines. The ticket price is about 1,50EUR.

Do you want to meet the real bussini ecologici – minibuses, cruising slowly, but harmonious in the old part of the city? Their numbers start from 11: 118, 116 and others. If you want to stop the bus – let the driver know by waving your hand. As it was told before, if you want to go out of the bus you need to push the yellow button. It means that Fermata prenotata or Stopping ordered.

The river excursions in Rome are mostly organized by Battelli di Roma. The excursion bouts make the river tours in the period from April till October. During the winter season, the timetable usually changes. What is more, tourists can get the audio-guide in 7 languages.

There are many popular river tours for tourists, conducted with the wine testing, free dinners, and music. During the excursion you can see many city sights, situated on the banks of the river Tiber. 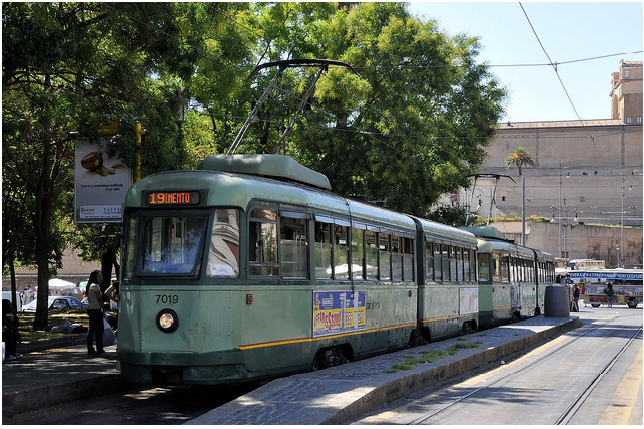 Taxi in Rome is blue and yellow. You can meet cars of different models: Opel Corsa, Lanca, Mercedes, BMW and many others. The price for taxi will be the same, not depended on the model of your car. To make a deal better, you need to speak Italian or have a paper with the proper address. What is more, it is important to take a visit card of your hotel.

Frankly speaking, taxi is an expensive way of travelling. It costs about 3EUR in the day time, about 4,50EUR at the weekend, about 6,50EUR at night. The number of kilometers cost about 1,10EUR per each. Pay attention that the driver must tell you about the tariff changes beforehand. The package piece costs 1EUR.

You can order taxi by phone, when the price for car will be included in the price for your trip distance. You can also ask to call for taxi in your hotel or restaurant – no one will refuse to help you. There is also a variant to find the car just at the taxi stand. If you want to catch the car in the street, there is no guarantee that the car will stop – it is prohibited to stop the taxi in the street in Rome.

Many tourists come to Rome on their own cars. It is important to admit that it is senseless to drive a car in the center of Rome. There are few reasons for it. First of all, the driving style of Romans is very random. Secondly, the streets are full of motorbikes, little cars, bicycles. Thirdly, the center of Rome is a rather small territory, which is easy to walk around. You need to have a special ticket to get into the city center.

Renting car in Rome is also a good variant to get a comfortable trip. You can hire a car just in case you are more than 21 years old, have a driving license, and more than a year of driving experience. There is an opportunity to pay for the service with your credit card.

Dear tourists! Do not forget to pay for your trip in the public transport of Rome! The fixed penalty can be about 40EUR. If you have no money to pay for your trip, you will get a check that must be paid in the period of two months. Failure to pay penalty is punishable by a fine of up to 200EUR. Be careful and honest with yourself!

Author Bio: Lily Berns likes to write and take photos of interesting places. During her free time, she travels in different cities with her friends.

4 Reasons To Hire A Concrete Contractor

It’s Tough To Live Without Medicine

Indulge into your travel dreams and spend your holiday vacation by checking out different yacht rental activities here in Singapore. In this adventure, every stop will allow you discover something different and each moment on-board […]

See the greatest of Istanbul on this 1-day tourism Istanbul seashore excursion. With the help of your skilled local guide, expend your time at port in Istanbul travelling this world class city’s numerous highpoints. This […]

Are you wondering which city to head out to for the upcoming holidays? There are a lot of places to explore in India. If you have never been to Madhya Pradesh, then you should try […]